Young has been informally crowned the "Godfather of Grunge" and on 1994's Sleeps with Angels he demonstrates why he deserves such an honor. The album is full of subtle beauty and fragile, whispered lyrics. It is a tender plea to the times we live in yet seems from another era with it's disembodied feedback. On the album's epic signature piece, the 14-minute poem "Change Your Mind" (listen to a sample clip here

), Young shows himself the complete master of dark guitar atmospherics and bloody raw emotional vulnerability. Exploring modern tragedy and decline with sad resignation, it finds consolation in "My Heart".

It has been suggested that Sleeps With Angels is the sequel to Tonight's The Night. The 1975 masterpiece has many similarities which are explored in a Broken Arrow review of Sleeps With Angels. In addition, there are a number of similarities between the late Danny Whitten and Kurt Cobain tragedies besides their grizzled blond looks.

Much has been made of the connection between Kurt Cobain and Neil Young. "Sleeps With Angels", supposedly written as a response to Kurt Cobain's suicide, Young wishes and hopes that Cobain in sleeping with angels. In his suicide note, Cobain quoted Young's lyrics from Hey Hey, My My (Into the Black) "it's better to burn out than to fade away".

Is "Sleeps With Angels" Neil's way of responding that it is better to fade away?

See Just Another Line in the Field of Time page for a full lyrics analysis and discussion of the meaning of Sleeps With Angel's epic "Change Your Mind" and other Neil Young songs.

"Sleeps With Angels will remind you, in places, of After The Goldrush, Freedom, Zuma and Everybody Knows This Is Nowhere - among others - and yet it will also sound like no Neil Young album you have ever heard. That's partly because it's got a new tone to it, a sadhearted, almost religious tone. (There's none of Ragged Glory's sloppy riffing here.) And it's partly because of the array of bloody strange instruments he and Crazy Horse have selected to adorn these 12 songs.

Sandwiched between them is a genuine Neil Young & Crazy Horse masterwork called Change Your Mind. It's a case of Name That Tune when it starts, except that Change Your Mind goes on forever - longer than Down By The River, whose marvellous extended guitar solos it calls to mind; longer than Cowgirl In The Sand, Cortez The Killer and Love To Burn. After every three or four minutes of guitar solo, an angelic, religious sounding chorus comes in, then another guitar solo, until finally, 15 or so minutes later, it comes to an end."

From Nude as the News review by BEN FRENCH : "While Sleeps With Angels doesn't quite capture the sadness surrounding the singer's sudden death, the jerky tribute does confront the suicide's resulting anger and confusion with all the distorted ferocity we've come to expect from Neil Young. "

On October 3, 1994, director Jonathan Demme filmed Neil Young & Crazy Horse at the Complex Recording Studios in Los Angeles. The Complex Sessions captured the emotion and angst of the Sleeps With Angels period.

"The Complex Sessions seems to me to represent a pivotal moment in rock history (as, say, "Smells Like Teen Spirit" did), not only because it's so good but also because it is a breakthrough in the creative use of a medium (the long-form rock video as a work of art) that has defeated most supplicants, including Neil as often as not. 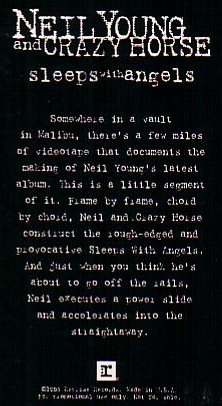 "Somewhere in a vault in Malibu, there's a few miles of videotape that document Neil Young's latest album. This is a small segment of it. Frame by frame, chord by chord, Neil & Crazy Horse construct the rough-edged and provocative Sleeps With Angels. And just when you think he's about to go off the rails, Neil executes a power slide and accelerates into the straightaway."

More on Kurt Cobain and Neil Young and Nirvana on Wikipedia.